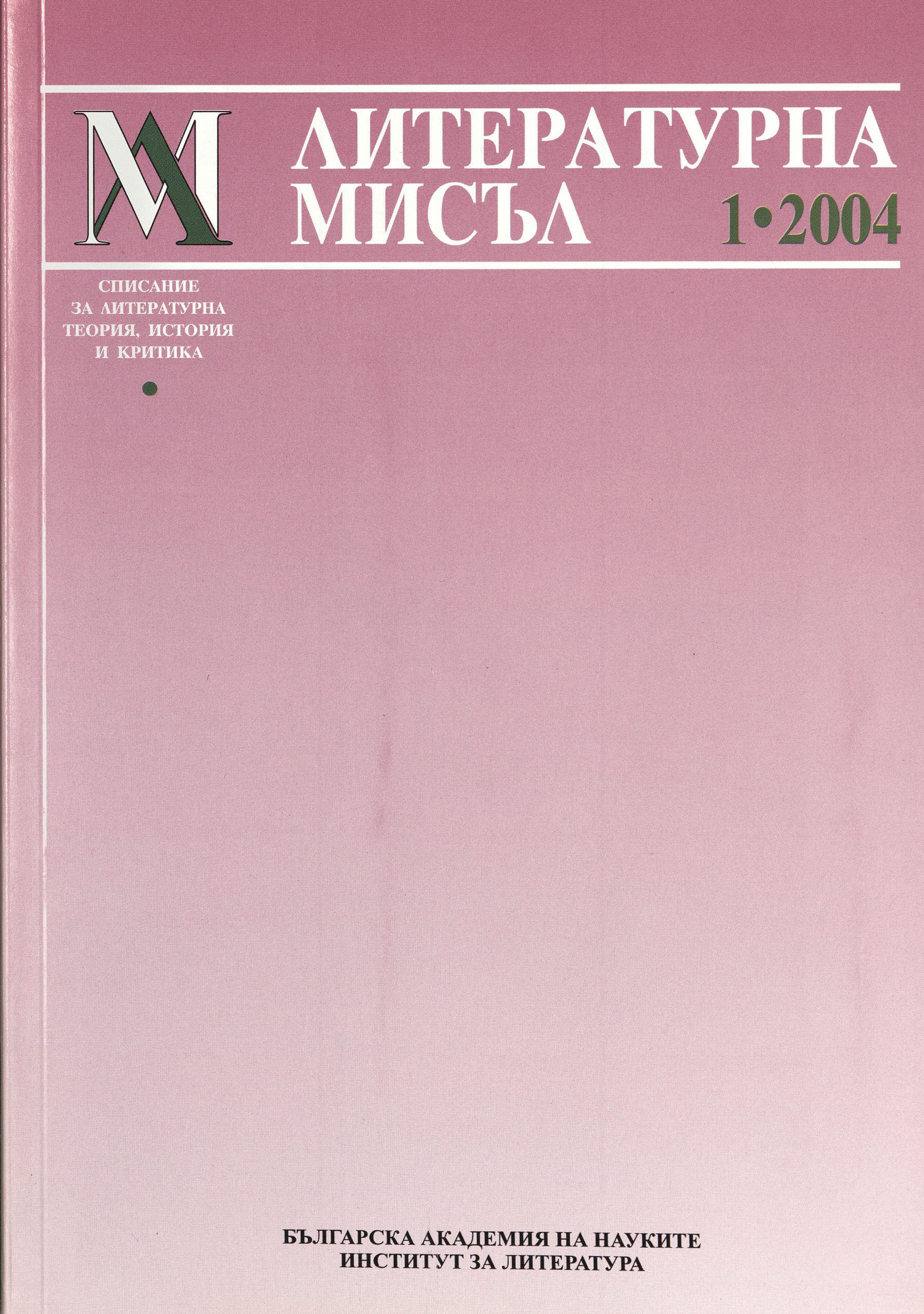 The subtitle of the present article, ‘Not Written on the Occasion of the Centenary of Chekhov’s Death’, clearly and emphatically indicates the fact that it is not a eulogy. In a distinctly non-celebratory tone the article makes the point that although well known, well respected and well analysed the world over, Chekhov’s work nonetheless remains homeless in the literary world. The peculiarities of his narrative and dramatic modes still puzzle critics and are yet to be comprehended. One approach to them – the more common one – attempts to justify and reconcile those peculiarities with earlier, accepted or even ‘classic’ rules. The opposite approach tends to align him with the modernist rebellion (a quiet rebellion, in Chekhov’s case) in European literature sinse Maeterlinck and Joyce, a rebellion in the face of which the new branch of literary studies, narratology, turned out to be nearly helpless. In semiotic terms, Chekhov’s narration enters into an iconic relationship with his main topics, boredom, and the virtually untranslatable poshlost’ (the closest one can get in trying to render it in English would perhaps be by using the adjectives ‘common’, ‘vulgar’, ‘trivial’). Adopting a contrastive-intertextual approach, the second half of the article shifts the attention from the more general concept of literary space to a specific comparison between Chekhov’s works and those of Nikolay Liskov, whose narrative mode seems to be in a relationshep of direct opposition to Chekhov’s. Intertextual links are suggested between two pairs of works by the two authors, Chekhov’s The Lady with the Lapdog and Leskov’s Lady Macbeth of the Mtsensk District, on the one hand, and The Daughter of Albion (Chekhov) and The Left-handed Craftsman (Leskov), on the other.

The present essay attempts to find a new approach to the investigation of the famous lyrical digression and the motif of bird-troika in the finale to the first volume of ‘Dead Souls’. The genealogy of this motif is not sought in the borrowing from foreign poetical sources but in the working of a deep motif scheme determining the generation and the transformations of certain texts in Gogol’s oeuvre and the writer’s memory of them. The bird-troika motif is examined as a complex integration of the finales of ‘The Diary of a Madman’ and ‘Taras Bulba’ in the finale to volume one of ‘Dead Souls’.

This text is a short presentation to the next five articles, which were delivered during the interdisciplinary conference Enlightened Laughter. The conference was organized by Bulgarian society for 18th century studies and took place at University of Sofia at 3 and 4 April 2004. The participants were scholars from Bulgarian Academy of Sciences, lecturers from several Bulgarian universities and guests from Macedonia and Turkey. Organizers had tried to encourage their colleagues to deal with several topics: Laughter as social, psychological and cultural phenomenon; Laughter, comic and parody in literature, art and culture from the age of Enlightenment and their effects in other periods of Bulgarian, Balkan and European culture; Laughter in popular culture, etc. Some observations on the text are offered, and some conclusions too.

In the present article the author tries to reveal the attitude towards the laughter on the Balkan during the formation of bourgeois ethic code. The data, collected from many Bulgarian, Greek, Serbian and Ottoman texts from XVIII and XIX centuries, show that the image of Balkan’s homo ridens is not undivided but depends on the entire ideological atmosphere, as it is presented by different texts. The demonic image of the laughing person is categorically shown in the texts, representative of the conservative circles, which were connected with Patriarchate of Constantinople in the Ottoman Empire. The heralds of the Enlightenment’s new ideas defended a contrary opinion. The problem of the laughter is shown in the article as an intriguing issue in the context of the debates between church and the defenders of new ideas about modernization of society, burst forth on the threshold of the bourgeois era. It can be proved definitely by juxtaposition of the negative attitude of Nikodim of Mount Athos towards the laugh and the laughing person with the opposite viewpoints of Rigas Velestinlis, Adamandios Korais, Konstantin Fotinov, Neophit Bozveli, Emanuil Vaskidovich, Raino Popovich, etc.

The paper is a critically informed commentary on Lady Elizabth Craven’s epistolary memoir A Journey Through the Crimea to Constantinople (1789), which is presented within a context defined by Thomas Hobbes’ pronouncements upon laughter, on the one hand, and key Enlightenment perceptions of ethnic and religious difference, on the other. Recent writing has tended to foreground Thomas Hobbes’ position as a political thinker while largely ignoring his contribution to moral philosophy. Hobbes, who is best seen as a major precursor of the Age of Enlightenment, strongly disapproves of the ‘passion of laughter’ on moral grounds and claims that the proper task of ‘great minds’ is ‘to help and free others from scorn’ while ‘compar[ing] themselves only with the most able’ (Leviathan, Chapter 6). In the context of the present paper, this is read as a plea for tolerance and acceptance of otherness. While Hobbes’ moral-philosophical legacy exercised considerable influence in the following century, there was also a fair amount of inconsistency and contradiction in the writings of his followers. Thus Voltaire emerges very much as his disciple in his Letters Concerning the English Nation and A Treatise Upon Toleration while his later correspondence with Catherine the Great reveals drastic non-acceptance of certain forms of otherness, most notably of the mores of Ottoman Turks. The paper attempts to shed further light on the apparent contradiction between Enlightenment strictures upon intolerance – especially when the latter is expressed through derisive laughter – and eighteenth-century practice as revealed in Elizabeth Craven’s memoir. The memoir tells of the writer’s 1785-6 journey across Europe, starting with France and Italy and ending with Constantinople, the Western Black Sea coast, and Wallachia. Craven’s tendency to privilege select ethno-geographical localities at the expense of others testifies to the emergence, in her time, of a conceptual model based on a gradation of intra-European ‘Orients’ and ‘Occidents’. The traveller identifies with some of the ‘Occidents’ (e. g. France and Austria) and respects the achievements of the Occidentalized aristocracy of Poland and Russia. However, she likewise projects a largely Orientalized image of Italy, has mostly contempt for the Islamic Orient as exemplified by the Crimean Tartars and Ottoman Turks, and indulges in derisive laughter at the expense of the Wallachian elite’s attempts at self-Occidentalization. Craven’s epistolary narrative thus embodies an attitude to certain forms of otherness that postcolonial criticism, inter alia, has taught us to regard as typical of the West. However, my argument differs from the arguments of most critics working within the postcolonial context in emphasizing Craven’s marked divergence from the prescribed Enlightenment attitude of tolerance and acceptance as typified by Hobbes’ strictures upon laughter and derision.

Bulgarian national mythology was not unified and solid, even in the period of the National Revival. There were different rival variations competing in the sphere of the literature. There were parodies of the main myths too. Interestingly enough they were not only in the texts of radical authors like Luben Karavelov and Chisto Botev, but in the work of writers who build national mythology in other texts. Practically all mythical constructions were objects of parody. The paper is focused only at some cases: mock interpretations of the glorious past, the lives of the new martyrs, and the motif of the unfortunate family. The examples were driven from works of Vasil Popovich, and memoirs of Svetoslav Milarov, Zachari Stoyanov, Stoyan Zaimov, and Mincho Kunchev. The conclusion is that parodying some nationalistic constructions this text did not subvert the mythology as unit.

The kind of laughter that I call gothic is to be heard or produced primarily in literary works belonging to the British Gothic Revival (1764–1820). The peculiarities of such laughing are result of its paradoxical amalgamation with fear. Due to this mixed character it is akin to the dark romantic grotesque described by Wolfgang Kayser and Mikhail Bakhtin. Within the uncanny mixture of joy and grief, of laughing and crying, I differentiate a variety of roles played by the gothic laughter. We can observe the humour of the servants in Walpole’s and Radcliffe’s novels, the rebellious humour of the Freudian super-ego, the daemonic or Satanic laughter of Maturin’s Melmoth, the laughter caused by automated bodies, mechanical or ghost simulacra in M. G. Lewis’s The Monk and E. T. A. Hoffmann’s Der Sandman. In the analysis are applied concepts from theories of laughter by Baudelaire, Henry Bergson, Freud, and Helmuth Plessner. Self-reflective and eccentrically positioned, gothic laughter is a symptom of painful personal self-observation and self-knowledge, as well as of the insuperable cognitive, aesthetic and existential anxieties.

The paper is concerned with the striking abundance of nose images in the literature of the 18th century and their ambivalent relatedness to the carnavalesque imagery. Focused on Sterne’s Slawkenbergius’s Tale from The Life and Opinions of Tristram Shandy Gentleman and considering evidences such as Voltaire’s Candide and Zadig, it explores also the tradition of literary thematizing of noses in a wider historical perspective. The assumption suggested is that during the Enlightenment the literary interpretation of noses played a clearly expressed subversive role in relation to the official ideological bias and it was during the same 18th century that literary “nosology” took a specific turn that predetermined significant thematic developments in later European literature.

The article tackles the evolution of characters from the point of view of the time in the novel, analyzing the transformation of certain techniques used by Balzak in Proust’s novel. Balzak created a kind of narrative presence of his characters comparing several portraits from different moments in their lives. Proust’s character unravels in the course of time – a set of images often contrasting, isolated within the framework of time. The meaning generated by Proust’s character is in direct proportion to the narrator’s inability to dwindle him or her to a single image; it is in direct proportion to the multiplication of forms. The point of departure mingles with the search for truth, which slithers away for ever. This search is always situated in time, and truth is a function of time. Balzak’s novel has a dramatic structure and the reminiscence serves the purposes of explaining the reasons. Time is used by the novelist as a method of clarification; it presages and prepares the future. Proust releases the forms of temporal narrativity from their dramatic function and leaves them develop on their own, aesthetisizing them.

The paper deals with the rhetoric and narrative models with the help of which Zachari Stoyanov’s biographical work builds up the national-historical myth Botev. There is an interpretation of the functions of the existence of the rationalistic and positivistic point of view in forming Botev’s personality and the irrationalistic point of view that a genius is something inexplicable. The meanings emphasizing the exceptionality, the uniqueness of Botev has been dealt with. The observations that have been made prove that Zachari Stoyanov’s text shows as the nature of Botev’s uniqueness his feeling for freedom. With that feeling the biographical discourse links the poetic identity of the poet-chieftain’s life. The paper interprets the way Zachari Stoyanov’s biography uses poetry’s value to mythologize Botev and his historic significance.There is analysis of the role of the creation of the myth Botev on the, emphasized in the text, identity life – poetry. The research highlights the significance of Zachari Stoyanov’s work on the existence of this myth in the spiritual history of the Bulgarian people.