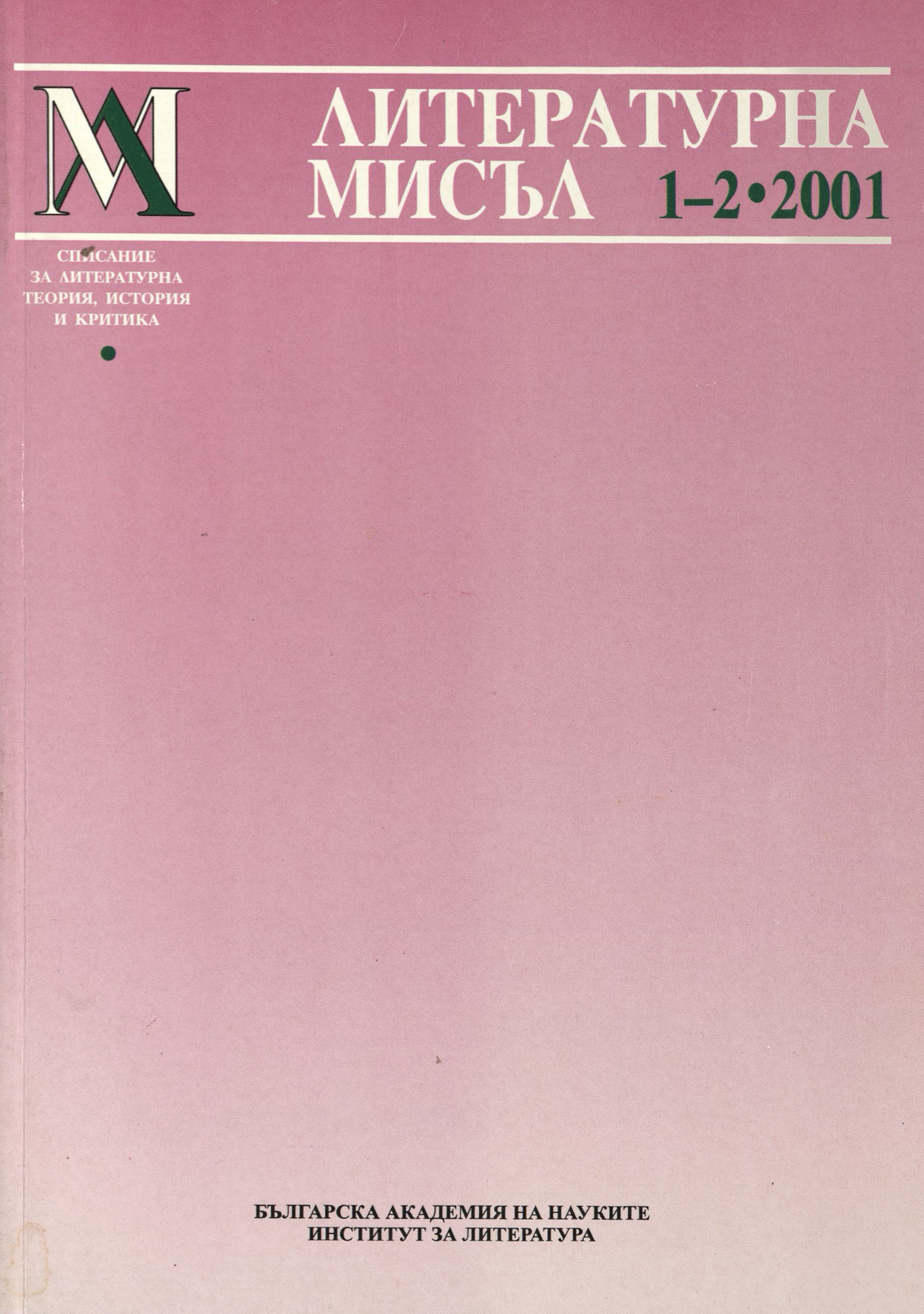 The article tackles the problem of the boundaries of literature via the primeval embedment of humans in the word. Depending on whether this word belongs to God or man, the author calls of Foulcault to postulate two basic statutes of language, which he takes to be markers of the boundary between literature and non-literary texts – referential speech, literary speech and speech in its literary status. These theoretical formulations are grounded in the 1100 years of Bulgarian literature. As a result of this analysis the author ascertains the existense of a special kind of language in Bulgarian literature – referential in nature yet mimicking literary models. This borderline and transitory language, merely mentioned in this text, is subject to another analysis.

The material subsumed under the topic of the “national poet” involves several important and interconnected areas of study: intellectual and literary history, canon formation and reception theory, and that broad field of social and culture studies that deals with collective and symbolic representations, with collective memory, and with myth and mythmaking. An interdisciplinary focus presents its own special challenges, but the matter is complicated by the fact that, apparently by default, the topic has been left to literary historians, and in the main to those who in today’s idiom would be labelled “nationalist.” Whatever the other ramifications, it is evident that the discourse surrounding “the national poet” is somehow immanently autarchic – and this applies as well to recent scholarship that is not avowedly nationalistic. The traditional national scholarship, generated as it is by the symbolic-collective sense of, and social need for asserting identity, is, understandably, predisposed or indeed programmed to look inward and to keep what is outside at bay or at least out of focus. The comparative focus, that contextualization that is essential for seeing the phenomenon clearly and analytically has been largely absent. And it is a structured absence. In every national tradition the attention paid to the national poet has been immense and continuous, but it is precisely the comparative discussion that has been lacking – and made all the more obvious by the fact that the neighboring cultural, historical, and typological models have been so close at hand.

Every nation rationalizes itself through a system of images of sameness and otherness. These images, which define its identity, are involved in certain plots that can be interpreted as national mythology. One of the basic plots in Bulgarian national mythology refers to the mistreatment of faith. This motive can be found in of new martyrs’ passionals, in historical notes, folk songs and other texts. By analyzing and categorizing its numerous variants, this article tries to reconstruct the archetypal basis of this myth and its functional mechanisms and search for its context in real historical developments and processes as well as literary documents. The long-term goal is reconsidering the rhetoric of nationalistic mythological discourse, its development in time, the accents it uses and its means of operation.

The article treats the formation of the Czech Medieval pantheon, its “preservation”, partial rehabilitation and extending during the Czech Renaissance and its final completion. Its central points is about the specific verbal communication during the Haubsburg’s slavery in the Czech lands (and after it) and the formation of the silence language cult, whose patron became St. Jan Nepomucki (+1393).

The article examines a key episode from “Notes on Bulgarian Uprisings” by Zakharii Stoyanov – the suicide of Angel Kanchev, which serves as initiation of the narrator-protagonist. The author analyzes the dialogue between national ideology and Christian religion in the book and presents it as a kind of citation-identification. For Z. Stoyanov the revival patriotic discourse, while incorporating certain elements of the Christian religious system, corresponds with its general significance. The exceptional prestige of the religious and national-ideological systems during the Bulgarian Revival determines the specificity of their relationship as one of mutual identification. The powerful significance of Christian values for the axiological appropriation of patriotic ideas does not allow Christian motives and symbols to be merely quoted; they serve as communion in both life and literature. The ideologized man of the national revival period is not trying to instrumentalize the archetypes – he wants to identify and merge with them.

According to the author, the notion of literary canon presupposes a shared heritage that can be considered self-evident and not immediately penetrable. The article covers different aspects of the canon – its relationship to the system of values, to the community it was generated in, to cultural institutions and its own development in time. The author analyzes the simultaneous existence of several competing canons and their interrelationship. He challenges the idea of the waning of canons and claims that they have specific functions in the postmodern era.v

The paper deals with two issues: that of the canon itself, and the fields, institutions and segments of the society where this canon is manifested. After a review of some possible conceptions of the canon (a set or body of carefully selected texts, conceptions centered around the outstanding Great Works: “canon-as-texts” vision vs. conceptions with reference to a certain rule beyond the objects: “canon-as-language” view of the canon), it is concluded that canon does not belong to the sphere of realization or phenomena, but rather to that of the system, and canonicity is a version of the range of interpretations; canon can be regarded as an entrenched or even institutionalized variety of the interpretation which is canonical; what changes is a certain set of interpretive assumptions. In this respect, what is opposed is the idea that a text could be canonical by its own inner quality. Making, changing and maintaining the canon is the function of some groups of professionals. They are often characterized by their preoccupation with the canon and, conversely, canon is almost exclusively approached as the principal field of a specific group of people. Canon is a field of operation for them as well as a field of reward.

In the examination the notion of interpretive community the author outlines three approaches to the concept of community – real community which can be described in sociological terms, a quasi-community not amenables to characterization (e. g. humankind in Kant’s view) and a third variant, a pastiche of the first two – an interpretation of the concept of intelligentsia of Karl Mannheim and the concept scholary community of Thomas Kuhn. In his understanding of interpretive community the author shares the view of Stanley Fish and agrees – partially polemicizing – with Ferenc Odorics, who, in his opinion, tries to delineate the boundaries of the concepts which are blurred in Fish. The author opposes the idea of extreme regulating and canonizing literary life and is against the reduction of literary interpretation to a common denominator. The interpretive community can indirectly be described in terms of more particular real communities the study of which requires a more refined analytical framework.

Our present study revitalizes a traditional set of rhetoric terms by relying on the works of Nietzsche and Paul de Man. The term “living rhetoric” does not only refer to the hermeneutic resuscitating of the old rhetoric but also to the continuous application of rhetoric instruments. Besides using, that is, keeping the set of definitions and the rigid taxonomic structure of the old (dead) rhetoric in motion living rhetoric takes into account the temporality of any definition, categorization and their exposedness to time (as a function and interpretation). Our study represents the tropologic functioning of language in scientific and in literary registers. The first chapter (entitled On The Tropology of Scientific Discourse: The Dialogic Function of Rhetoric) gives the de-Manian rhetoric deconstruction of the late structuralist works of Zoltan Kanyo. The second chapter (entitled On The Tropology of Literature: Where Paronomasia Lives) deconstructs Attila Jozsef’s poem Eszmelet (Consciousness) by bringing the trope of paronomasia into action while reinterpreting Paul de Man’s study Semiology and Rhetoric.