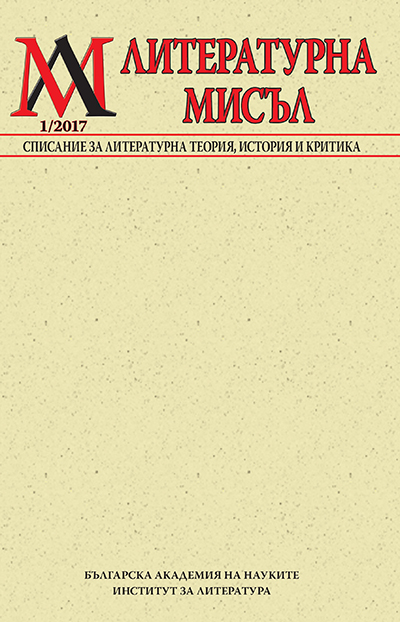 The paper raises the question of the place of the Biblical text in Bulgarian literature and the autostereotype of the religious indifferentism of the Bulgarians. Both the key texts of the famous Bulgarian literary critics (B. Penev, D. Konstantinov, A. Dalchev) and their reception in the latest Bulgarian literary studies are analysed. The cultural context of the perception of the Bible (and religion) is given in terms of formation of modernity, as the emphasis is put on the role of the Orthodox and Protestant thought. It is indicated that a new perspective on the phenomena can be provided by the postsecular thought.

The focus of the study is the place of the ancient writers in textbooks from the 70s of XIX century - "History of the Bulgarian People" (1873) by T. Shishkov and "History Bulgarian: T.1" (1871) by Gabriel Krastevich. Some of the most recognizable historians and geographers of antiquity (Herodotus, Tacitus, Polybius, Ptolemy, Eratosthenes, Strabo, Pliny, Ptolemy, etc.) are important authorities who contribute to the formation of a foreign historical narrative of national history. In Shishkov very rarely ancient names come with bibliographical references and are often indexed by the phrase "and antique X said ...". The case of Krastevichis the opposite, he has given the detailed notes and quotes. The paper analyses the problem of ethnogenesis and the ancient roots of the national identity in Bulgarian history textbooks of the XIX century. Establishment of national stereotypes passes through a historiographical mythical poetic narrative combining the scientific pretensions and national romanticism. The role of ancient cultural heritage can be read in its role of a common European cultural code beyond projects of national ideology.

Using the auto-textual approach the article clarifies how is the Bloody letter (a letter signed with a blood-written cross) created, a Bulgarian national relic well-known from Zahari Stoyanov´s text "Notes on the Bulgarian Uprisings", and played a substantial role for the April Uprising of 1876.

The article focused on the shortest and marginal work in Vazov’s cycle Epopee of forgotten, a top title in the national myth-poetic narrative. It proves that this marginality is seeming. A range powerful mythogenical energies works furtively under it through several of its characterizations like dramatic form and ballade heritage.

The text traces the process of transferring the human brain into an artificial mechanical body in Lyuben Dilov’s novel “To choose yourself." My task is to bring forth the contingent wandering of the awareness of the character Daniel Dimi between spatiality of the already lost body and the new, another body, whose different sensuousness and shape the character has to cope with.
The problematic identities of Dimi are presented by means of confrontation, a clash between own and foreign, between human reason (the peculiarities of knowledge which he owns) and opportunities provided by his the new mechanical body (this body presents him unlimited possibilities, but it itself is limited by the human who controls it).
The emphasis of the narrative, on the one hand, is laid upon the ways in which human identity is rationalized as unsteady in the confrontation with beyond human, with the Other; and on the other hand - reveals the peculiarity of cognition bound by certain conditions.

„The Time of Metamorphosis: Essays on Kafka” by the Sofia literary theory seminar shows a strong presence in the contemporary philosophical debate on the topic of metamorphosis. Starting from a detailed reading of Kafka’s text, the authors test the analytical, critical and meta-power of the figure. Kafka’s narrative is recognized in its potency for resistance to the heteronomies of the economic and political status quo in which we are nowadays intertwined.