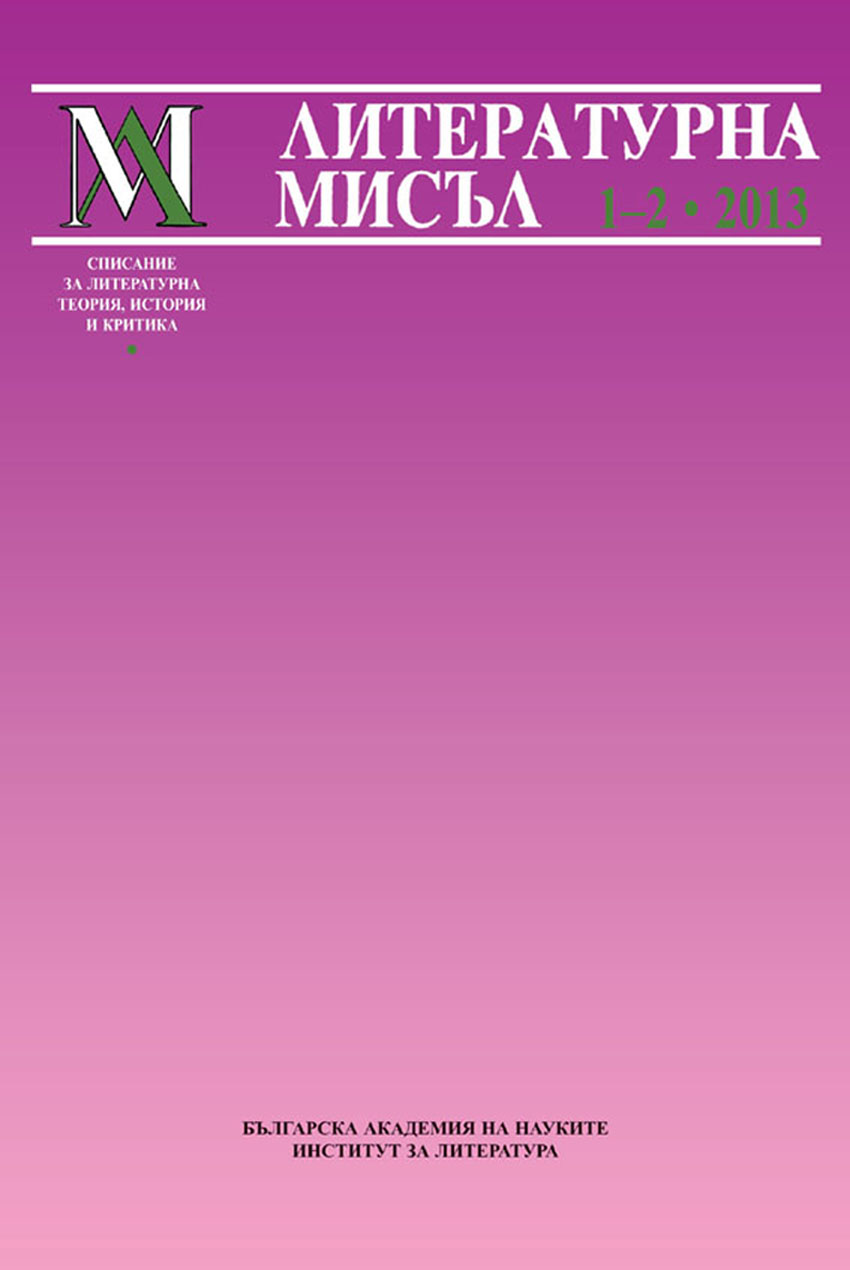 What makes possible a dialogue with the dead across periods of time? In this paper, the author wants to return to this question, focusing neither on the social transactions nor on the hidden potential of images but on the text in its written and printed form. The scholar shows how the Renaissance myth of reviving the dead is literally rooted in letters, that is, in an epistemology of writing as a medium able to transcend time as well as space.

Bulgaria’s intellectuals of the National Revival period are not the only ones faced with the “enlightenment or revolution” dilemma. The same issue is of concern to Bulgarian intellectuals throughout the age of socialism. The paper looks into the peculiarities of Tsvetan Stoyanov’s stance on the “problem”; these peculiarities manifest themselves in the literary texts and in the criticism written by the erudite author. Tsvetan Stoyanov and Georgi Markov are contrasted as polar opposites in terms of the possible choices for the Bulgarian intellectual before the fall of the Berlin Wall.

The paper aims at analyzing the images of the Bulgarian National Revival heroes in the Grand narrative, manufactured during the socialism. The heroes of the National Revival epoch were re-thought as predecessors of the socialist activists, using various propaganda procedures: neutralization of the attempts, made by the previous regime for establishing intellectual genealogy between it and the heroes from XIX c.; forging of particular slogans; re-shaping of school and university curricula; introducing anniversaries and commemoration practices; even founding research institutions. In the period of so called mature socialism, the national heroes were successfully integrated and re-used for the purposes of the new, nationally-oriented phase of the regime. Post-socialist attempts to re-think the national pantheon were not able to re-fashion the National Revival part of the narrative, whose kernel kept on being marked with unparalleled dignity, high moral and selflessness.

The text traces the memory of Islamisation in various Balkan narratives created and spread in different historical periods and in different political conjunctures. It seems that this process, thought of as the most traumatic (at least in Bulgarian memory), is interpreted by other national historiographies and folk narratives in a completely opposite way. Islamisation is remembered as the liberation from the aspirations of the Catholic and Orthodox churches (in Bosnia) or as a national awareness and cohesion (in Albania). Weather the different narratives choose as a motivation of the process the grievances of heretics ( the Bogomils thesis ) or the adoption of Islam primarily by the aristocracy which wanted to keep its property and privileges (class thesis) in most cases the conversion is presented as voluntary . Some isolated cases of violence are mentioned but a mass forced Islamisation policy of the Ottoman Empire is dismissed - with the exception of Bulgaria. The attitude of the non-Muslim majorities to the converts and the interconnection of the narratives with specific political conjunctures are also traced.

This aticle examines the question of medieval belief in use of Christian’s blood by the Jews for ritual purposes. The analysis is based on a case in Bulgarian town (Vratsa), happened in 1891, when the death body of 6 years old boy was found. As a result, in the town took place mass disorders and attempts to take the laws in their own hands by the Christians. Analysis is concerned on social reflection on criminal act, that happened in Vratsa. Focused on the social context, article discusses cultural stereotypes, which mirror community’s heterophobia and form the attitudes towards the place of Jews in the modern Bulgarian society. Research pays attention to the political context, which is dominated in that period of an enormously huge wave of repressions in Russia, directed to the Jewish people in the country. As a result of heavy terror a lot of refugees leaves Russia and sought asylum in the different European countries. The case in Vratsa reflects medieval myths, which is widespread all over the Europe during the centuries and shows the mechanisms of its modern political uses. The durability of this myth is analyzed in the light of the problem about Christian children canonized by the Church as saints-martyrs, which legitimize the local beliefs of this „common knowledge”.

The paper examines the forewords and afterwords and their influence on the reception of Uncle Tom's Cabin by Harriet Beecher Stowe during different periods of its publication in Bulgarian. Approved as a certain genre form during the time of Bulgarian National Revival, when there was a limited number of articles and papers on specific literary or political issues, the preface was loaded with some extra features. Through its presentations of the cultural context in which the different translation of the novel appeared we can trace some of the stages in the critical perception of the work. Afterwords of the novel appeared much later – after 1944 – and operated in the other ideological environment trying to correct the interpretation. The aim of the presented paper is also to identify some important moments in the development of these paratexts with their first references to the author, the importance of the work, its impact and its reception in the light of changing social and political conditions.

Мария Пипева, Що е детска литература и какво да правим с нея (според англоезичната теория и критика на ХХ-ти и началото на ХХІ век)
Maria Pipeva, What is children’s literature and what to do with it (according to Anglophone theory and criticism in the 20th and the beginning of the 21st century)

The paper offers a survey of the most salient trends in children’s literature criticism and theory in English over the 20th and the first decade of the 21st century. Drawing parallels with the development of children’s literature criticism in Bulgaria, it establishes some typological and thematic similarities until the 1940s and traces the subsequent divergence caused by the dramatic changes in the Bulgarian sociopolitical and cultural scene. The main focus is on the diverse ways in which the theory boom since the 1970s has transformed the conceptualization of the field of children’s literature in Anglophone research – a process from which Bulgaria has remained largely alienated. The paper sides with the position that a more active reception of scholarly thought in this field is an important way of overcoming its current stagnation in Bulgaria.