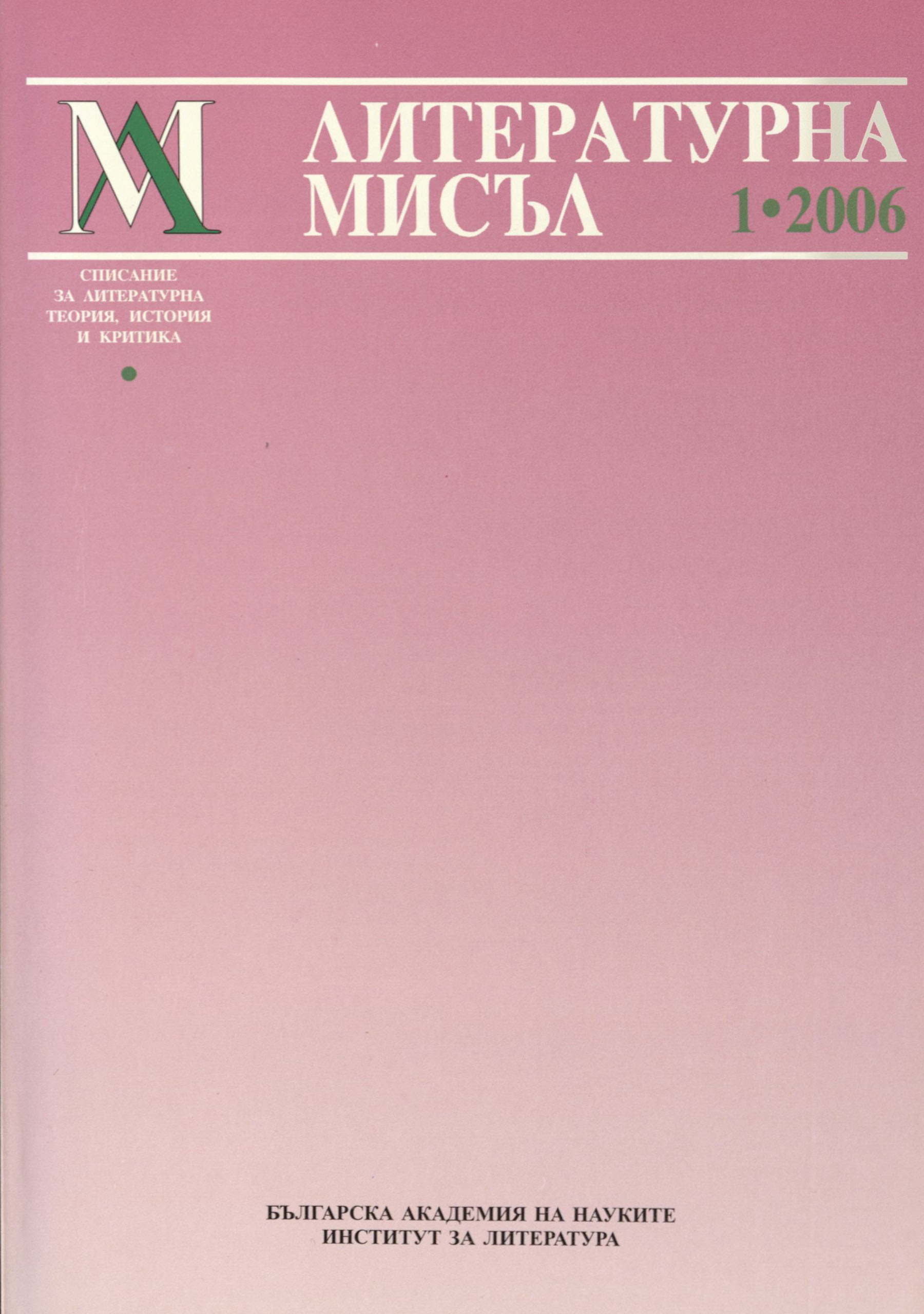 The article deals with the influence of the deconstructionist theory of language on the field of literary criticism. I have tried to make a critical analysis and a reassessment of Paul de Man's thesis of the impossibility of reading. The analysis is focused on the basic argument of this thesis, namely the argument about the essentially rhetorical nature of the language. The subject of my analysis is Paul de Man's article "The Reading" where the author is trying to show how the rhetoric of the text of Proust's novel destroys what the text itself claims to be its meaning.

My intention is not to reject de Man's reading, but to emphasize the elements in his text that could be a subject of discussion, and finally to defend the possibility of another type of reading of Proust's works. The aim of this type of reading would be to prove that the narrator in Proust's novels manages to convey the meaning and to tell the truth he intended to tell in spite of the destroying effect of the rhetorical structures of the texts in these novels. Main points of his rule, trying to achieve an objective evaluation of his personality as a ruler.

The paper comments on the trauma caused by the shame and fear, as a significant psychosocial factor in the cultural historical processes during the Bulgarian national revival. The trauma is examined as a complex construct of inherited and acquired, as a projection of different traumatic situation in the life of the people of that time: situation "under the yoke"; cultural retardation; economic and commercial deficit; the destiny of "a foreigner" (Alfred Schütz), etc. The paper also studies the different types of display of the trauma caused by the emotions of fear, shame, and anger. At the same time the historical and cultural situation of the Bulgarian national revival finds ways to surmount the trauma.

The structure of Bay Ganyu reveals a problem that is especially important to the total realism of the 1890s - the aspiration for valorization of the "truth", the life authenticity at the expense of the "artistry", the fiction. But in contrast to other works, Bay Ganyu discusses the problem mainly by the specific multiplication of the speaking institution's hypostases. By studying the inner dynamics of the narration, the paper proves that Bay Ganyu is a unique work because of its ambiguous author and character placing and because of the overcomplex statute of the speaking voice, which covers the whole range between fictional and real. The character Bay Ganyu is hardly restrainable into the self-sufficient fiction of the work's reality and the Author is constantly keen on entering the fictional, on metamorphosing into a character. Between these two poles a dynamic system is developed of narrating and commenting modes that are complexly inserted in one another, synchronically imposed or observing each other as mentors. Through a scrupulous analysis of the text, the study reveals and examines five modes of narration terminologically named as follows:

From this position posed here is the problem of the gradual substitution of the protagonist for the occurence presented by him. Examined as well are the effects of this transformation upon the work's figurative system.

The article provides a commentary on some key positions from the project of the literary movement LEF (the Left Front of Art) with main representatives Brik, Mayakovsky, Tretyakov, Chuzjak, etc. This group formed in the center of the dynamic processes and debates during the 1920s in Russia, developed after the social and political changes initiated in 1917, and is considered a proponent of an "avant-garde" literary project. Its views are concentrated on the idea of literature as a vehicle of social action, retaining and safeguarding the continuous becoming of the Revolution and the related idea of selfdecomposition of literature under the pressure of the processes in the social sphere. Central place within this framework occupies the concept of "literature of the fact", developed by Osip Brik. According to the members of LEF, the situation after the Revolution demands informativeness; a demand, which literature with its characteristic nature of deformation and displacement ("sdvig") of reality cannot satisfy. This provides for the specific genre transformations, described and argued for in the various theoretical and critical writings of LEF. In this respect the lyrical genre, the central sphere of their creative practice, is compelled to engage itself in performing practical, communicative functions - a view that underlies the concept of the "lyrical feuilleton", developed by the poet Nikolay Aseev.

The paper is part of a textual body that is a specific reconstruction of literary history. At issue here is Vaptsarov's poetry characterized by 'ekane', which itself is a starting point for an overall introduction to the unresolved textual problems of Vapsarov's lyric poetry (the myth of the single book and its hesitation; the necessity of substantial commentaries on the verses; the political essence of the Macedonianism; etc.). The study opens new contexts for the works, emphasizes new details, makes logical demarches in order to reconcile so far contrary opinions.

I discuss here Shklovsky's theory of estrangement formulated in a number of texts written before the October Revolution of 1917. The concept of estrangement can only be grasped if the early Shklovsky is placed in his proper context, that of World War I; we need to begin to see him as an author shaped by the War and participating in the larger constellation of brilliant European essayists who responded to this momentous event. To this end, the article draws parallels between his writings and those of Ernst Juünger and Georg Simmel. More importantly, it uncovers the conservative aspects of Shklovsky's theory of estrangement and analyses his contradictory attitude to democracy and modernisation. The final section traces the fortunes of Shklovsky's concept of estrangement at the hands of its most significant critics, Brecht and Marcuse.

Baldwin, Emperor of the East is a German play related to the second Bulgarian empire. The geographical spots that mark the dramatic action are Constantinople, Adrianople and Turnovo, and the antagonist of Baldwin of Flanders is the Bulgarian tsar Kaloyan. The detailed title in Latin and German makes the reader familiar with the drama's genre, with its staging and printing. It is a school play staged with religious instructive purpose in the colleges and secondary schools of the Jesuit order.

Baldwin, Emperor of the East is a religious drama that builds its plot on a historical base and elaborates a motif typical of the so-called folk-literature, namely the calumniated virtue. The author collects reports, motifs and suggestions from chroniclers, preachers and folk storytellers, and weaves the fictional woven. He recreates the "fearful" character of the Bulgarian tsar Kaloyan promoted by the Byzantine annals. The study outlines the main points of his rule, trying to achieve an objective evaluation of his personality as a ruler.