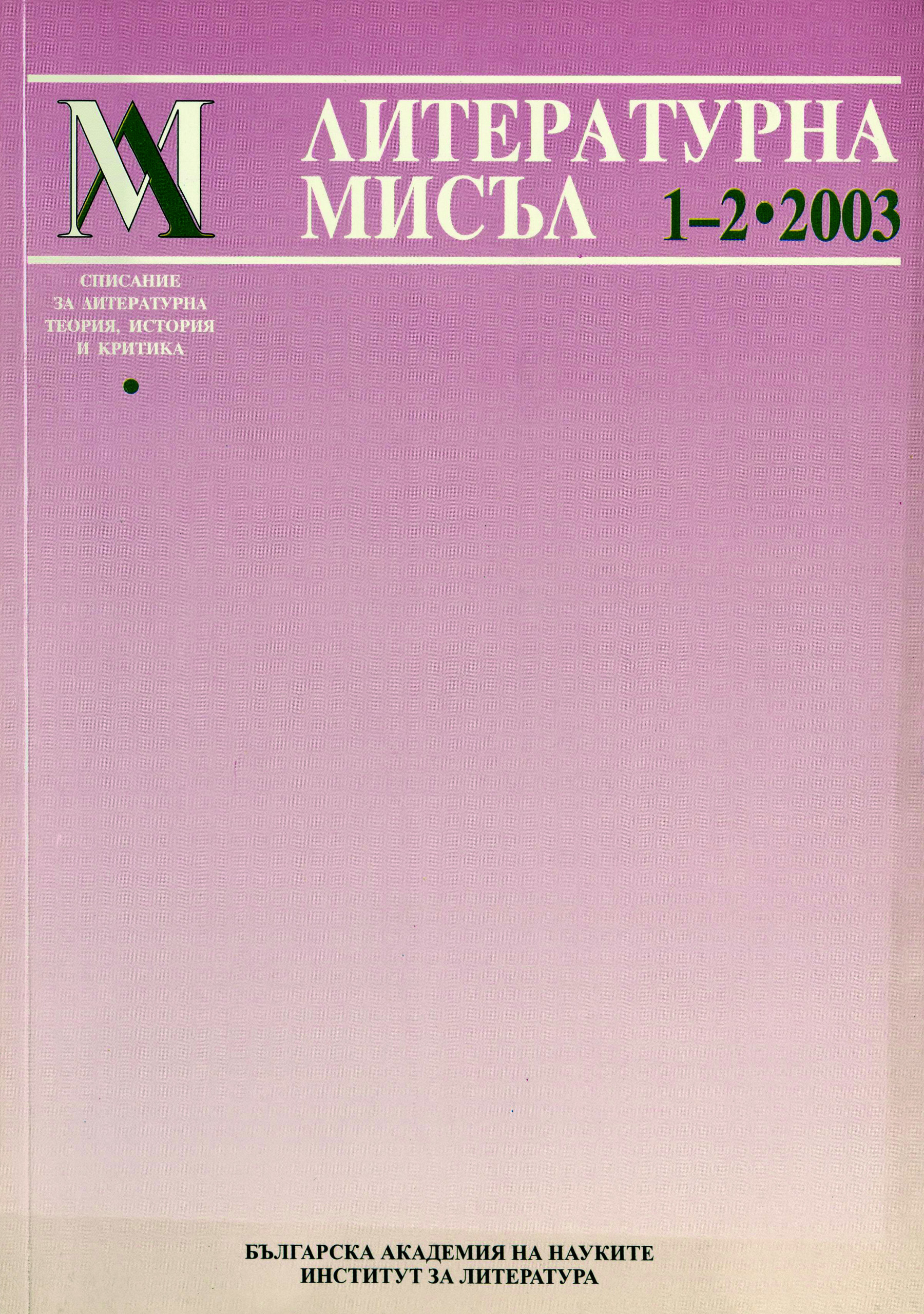 The text interprets the “high” national-ideological use of history, which emancipates itself from myth in the parameters of the collective mind. The text makes this on the background of the entire process of imposing the scientific approach to history from Paisiy on. An essential problem of the text is how during the late Bulgarian Revival the national literature produces and exploits the myth of the Bulgarian Golden Age. An attempt for revealing the mechanisms of this process is made. In its ideological centre is the producing of the image of the April rebellion from 1876 as the Bulgarian initial cosmogony action and the time of the national liberating fights from the 1870s as the Bulgarian Golden Age insisting on its permanent reproduction. This mechanism is studied through the presence of the historical fact of Unity from 1885 in the “high” national-ideological literature (Ivan Vazov and Zakhari Stoyanov) as an attempt of palingenetical remake.

The present text sets out to examine the transformation of generally human, philosophical, mythological (also folklore) patterns into the literature of Bulgarian revival, as it concentrates its interest on the way different power and leadership models intertwine in this process. The attention is focused on the mechanisms of authority-display, as they are presented in V. Droumev’s masterpiece “Ivanko”. This drama has been acknowledged as a highly symptomatic manifestation of the specific manner of Bulgarian revival literature. It absorbs and gives new meaning to traditional heritage, as well as to the interpretation of power as a specific essence melting into one different sphere of the deeply human – religious, psychological, social, intellectual, ethnic. The network of different semantic layers, the mutual transformation of micro- and macro- segments of power ontology has been investigated. A basic question for the text is the place of power between the opposition’s strength (involving inducement) and justice. The study attempts to analyze this split and the paradoxical configurations, combinations and unexpected coincidences in various syntagmatic and paradigmatic dimensions. Power (being not only domination, supremacy, oppression, tyranny, control, but also authority, influence, arresting magnetism) is explored as simultaneously blending the oppositions and transitions between some basic reference points. Power is the peculiar unity which merges the worlds of might, intensity, vehemence and stamina with the rules of justice, fairness, equity, impartiality under the arch of the conditions of the ethnic and social wholeness and integrity. The double mutual identification is the main notion of power in the text. It is regarded as an activation of the archaic cosmogonic myth of ambivalence, which is semantically equal and relevant to completeness.

The image of the traitor takes a specific, intermediate place in the system of values, presented by the dramatic play literature of the Revival. The traitor is not a positive hero, neither an enemy of Bulgarians, because he himself is a Bulgarian. The otherness (the characteristic of difference) in the historic dramas is to be read as difference from the moral required (when the traitor is concerned) and as ethnic difference, combined with the inherent lack of morality (when the enemy is concerned). The dramatic play literature of the Revival presents the image of the traitor in an up-going scale. The most hesitant of them is the hero Mortagon of Voinikov. Ivanko of Vassil Droumev and Mitra of K. Velichkov illustrate next grades in the development of this character. The inner discrepancy of the Droumev’s hero, as well as the moral problem of the duty to the motherland, of the liberty to make choices, turns Ivanko into the most commented drama of the Revival. The elaborate review, conducted here, of the critics’ opinions and elated evaluations, of the various readings of the main hero’s image, prove his provocative character. The efforts of the critics seemed insufficient to comprehend Ivanko and literature further developed his image during the next decades. Ivan Vazov’s drama “Borislav” and Tsv. Minkov’s short novel “The death of the regicide” put in other situations and give other solutions to the hero of Droumev.

Geo Milev (1895–1925) is one of the most erudite, versatile, controversial, and enigmatic Bulgarian modernists. He is a poet; translator fluent in several European languages; literary, art, theatre and music critic; illustrator; theatre director; and editor of two of the most radical modernist magazines in Bulgaria – Vezni (Scales) and Plamuk (Flame). This study explores how Bulgarian Left criticism, from the mid 1930s to the end of the 1980s, interpreted Milev by means of the narrative of the Biblical prodigal son. Milev (and his Bulgarian modernist peers) are portrayed and interpreted by a story consisting of three stages: from 1913 to 1914 Milev created realistic art; then, from 1914 to 1922, he was interested only in modernism in the form of Symbolism, Expressionism, and avant-garde, and his greatest sin as a writer is that he avoided the burning social issues of his time; and, finally, from 1922 to 1925 Milev again shifted to realism in art that now, due to his newly acquired Marxist-Leninist worldview, made him a socialist realist and a poet whose martyr’s death elevated him to the Pantheon of Bulgarian literature. The essay critically outlines several aspects of the interpretive narrative about Milev: first, the story of Milev as a prodigal son is an ideological and teleological verbal construct; next, the critical fable of Milev as a repenting modernist has two forms–a detailed and short one which are used in different periods of Bulgarian cultural history; then, the narrative of the prodigal son is a form of the aesthetics of realism, whereas philosophically it bears some major resemblances with Cartesian idealism; next, rhetorically, the fable of Milev is rendered by means of metaphors of the path, whereas in terms of poetics the narrative is told always chronologically. The analysis concludes by sketching five corollaries of the narrative about Milev as a prodigal son that, in one form or another, can be perceived in Bulgarian culture down to this day.

In his novel Gods and Ants: Chronicle of the 20-th Century Stefan Tsanev uses some representing techniques, typical for the magic realism, to describe the fate of the Bulgarians in the context of the historical events. The fate of the characters is present in the light of Proto-Bulgarians’ heritage and Bogomilian tradition. In this way it attracts the readers’ attention to the roots of the common Bulgarian fate, closely connected to the history of the state. The succession of events in the novel’s world is presented as a matrix which reproduces itself during the centuries. The reality is presented as a demonic realm (like in the Bogomilian myths) and contrasts with Enlightenment’s ideas of people’s progress. The belief in collapse of all kinds of utopias leads to a typical postmodern loss of hope for the illusion of the sense.

One of the first articles of the Bulgarian philologist Petar Dinekov Literary Legends (1937) provides the occasion for this analysis. Petar Dinekov wrote about the risks of making-up scientific legends for literature for the first time in Bulgarian scholarship, before its ideological stagnation in the period after 1944. This way of critical thinking and volition of re-examination of the historiography in the field of literary knowledge are defined as ‘first stasim’ of the drama of the Bulgarian humanitarian thought where Dinekov brings the academic history of literature in question. Scrutinizing Dinekov’s ideas, in terms of the last changes in the Bulgarian humanitarian context (after the crash of the communist regime’s ideology in 1989); we can speak about ‘second stasim’ in the literary history researches and about some kind of a reinforced scholarly interest in the problems of the folklore. This article analyzes Petar Dinekov’s history-theoretical conception about the place of the folkloristic in the humanitarian academic corpus. The actual question about the contemporary borderline position of the folkloristic is discussed in the following perspectives: 1. Folkloristic between “expert” knowledge of literary history and ethnography, on the one hand, and “ideological” knowledge of eclectic science as anthropology and philology – on the other hand. 2. Crossroad position of the folkloristic researches – between romantic-nationalistic intellectual project of philology and Euro-expansionistic intellectual project of anthropology. The third perspective discusses the place of the folkloristic between literary-philological understanding (about oral and written word) and ethno-anthropological knowledge about custom and nature of living.

This article was influenced by two anniversaries – 300 years of St. Petersburg and 170 years of the poem “Bronze Horseman”. Special features and peculiarities of the St. Petersburg’s mythology and Poushkin’s poem were examined in the light of the category “boundary” – one of the most useful concepts in the contemporary Bulgarian studies in Russian literature. This approach helps the reader see different faces of the city: ceremonious and tourist advertising, on one hand, and nightly, sad, infernal – on the other hand, and their reflections in the poem (“Petra Tvorenie” and “Petropol”). In this new way of reading, special attention was paid to the interaction and the counteraction between the two main myths of the St. Petersburg’s mythology – the myth about creation and the eschatological myth. For the first time in the same text the fragmented eschatological myth was examined in its close connection with the myth of creation typical for before-Poushkin era and the attention was focused on the changes in “behavior” of the last one. Undermined by Poushkin in the contraries of its nature, the myth of creation was first compromised and then inversed. After all, due to dramatic conflict between History and Mythology (where they were in condition of dynamic balance), the myth of creation was absorbed in an anti-myth.

This study is a theoretical attempt at presenting the ideas of the famous theoretician of literature Jonathan Culler. Based on his interest in language and its nature of sign, the analysis is being focused on Culler’s literary studies, which make him one of the most provocative examiners of literature and its institutions. Along with literary criticism, the modern organized school and university, such institution is the language itself. In order to be complete the analysis pays heed to several crucial concepts of Jonathan Culler’s literary theory, examining them in discussion with the theoretical ideas of authors like Michel Foucault, Richard Rorty, Umberto Eco and Terry Eagleton.

This article is focused on two problems. First, there is the question of the role of the notion of fiction in the theory of fiction. It seems as though attempts to explain fiction and fictions end up either constructing fictions – imagined readers, stories of reading, imagined speakers – or appealing to structures which themselves turn out to rely on fiction, as in the case of the fictional emplotting that organizes the real-world discourses fiction is said to imitate. Second, there is the problem of the convergence of narrative studies and speech act theory, where the new emphasis on fictionality - the claim that literary works are fictional speech acts -paradoxically urges us to treat narrators as if they were real people, with all that that entails. There is a powerful humanistic ideology behind this claim. The theory of fiction needs to challenge this orientation and explore the possibility that literary narratives are, as in Pratt’s first account, real-world narrative display texts: not fictional speech acts but, if they must be acts at all, real acts of narration.