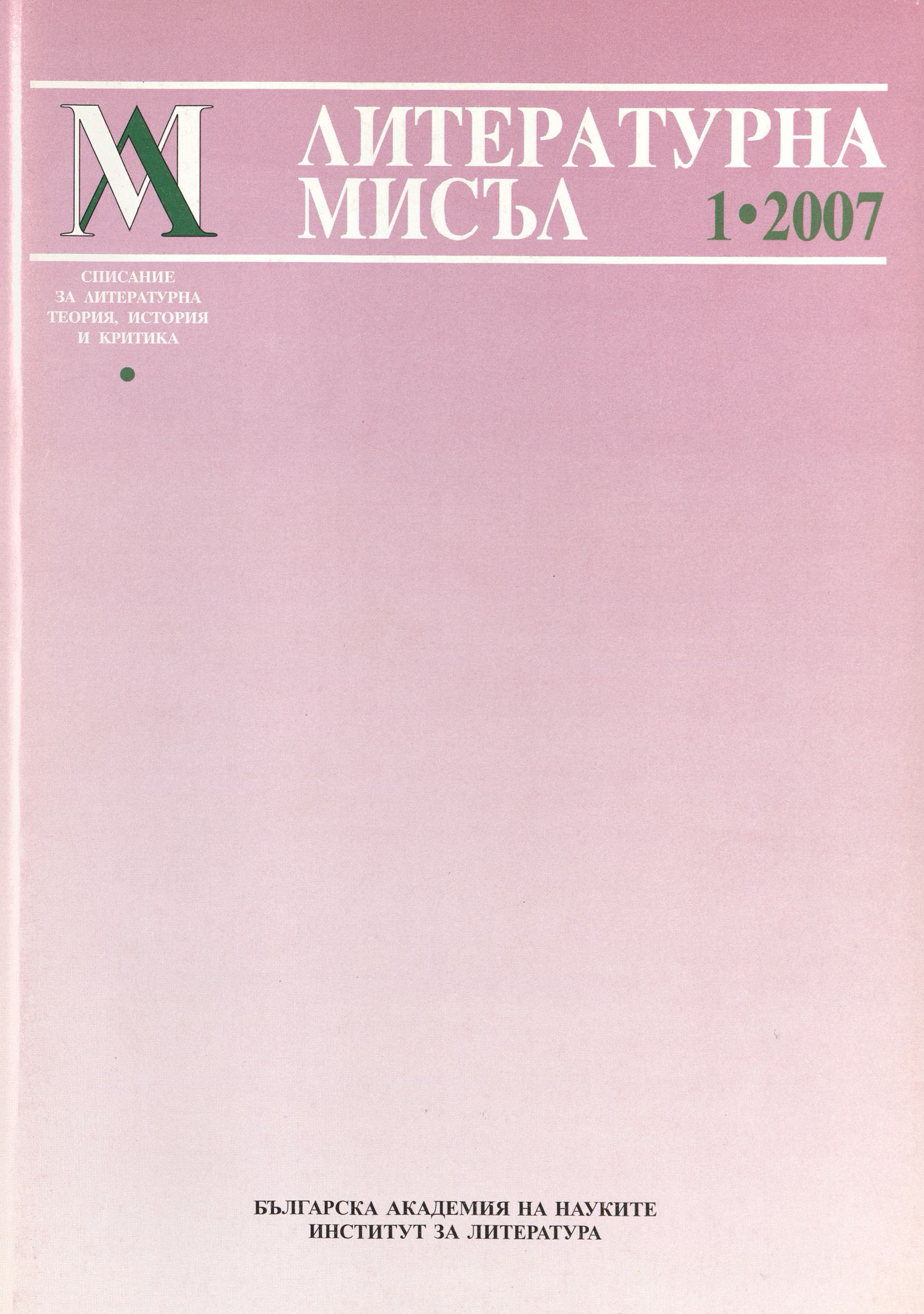 The current essay introduces representative points of view towards the relation between The European and The Bulgarian for the period 1762-1865. The first part of the paper is focused on the work done by Paisii, Sofronii, N. Bozveli, and V. Aprilov; the second part presents the Rakovski's attempt to rewrite the established concept about cultural metropolis and cultural "colonies". The leading role in Paisii's works is his effort to contradict Bulgarians to the other peoples, as the Bulgarian merits are emphasized. During the first decades of 19th century (Sofronii, N. Bozveli, etc.) begins the real constructing of the Bulgarian stereotype of Europe, which is thought as attractive, but frustrating social and cultural model. V. Aprilov introduces new point of view, which spares the Bulgarian self-confidence by limiting the competition within the framework of the Slavonic Orthodox community. He also rearranges the civilizing paradigm and put the Bulgarian in the "classical" Slavonic beginning. Further, Rakovski, trained at the Greek Enlightenment tradition, copies its matrix of forming a national identity. On the other hand, using the achievements of the contemporary humanitarian science, he strives for proving that the beginning of the Hellenistic Antiquity, as well as of the (Indo-) European civilization may be searched in the Arian heritage, whose most authentic successors are the modern Bulgarians. That turns Hellas, as well as Europe into Bulgarian cultural "colonies".

The Ottoman invasion of the Balkans in the 14th and the 15th centuries had interrupted in many aspects the natural development of the Balkan peoples. The author focuses on the idea of the interrupted statehood and analyses the ways it infiltrates the national identity building process of both the Serbs and the Bulgarians. The subject of exploration is the myth-making interpretations of the "fallen statehood" (in the cases of the Kossovo Polje battle and the Sofia battle), as well as the image of the "last ruler" (Prince Lazar Hrebeljanovic of Serbia and Tzar Ivan Shishman in Bulgaria). The myth-making interpretations of the Ottoman invasion are investigated in two chronological stages - the epics that developed in the 18th and the 19th centuries, and the powerful "historical" mythology, fabricated in the 19th century for the purposes of the national identification. The second type of interpretation strictly distinguishes the diverse sources of national identification and national self-confidence of the Serbs and the Bulgarians. On this basis the author outlines their different reactions during critical political situations in modern times.

The normal criteria for an author to be included in a national literary canon are that s/he should belong to the nation to which the canon is related, that s/he must write in the nation's (standard) language, and that her/his work is of reasonable size and aesthetic value. A criterion of secondary importance, valid in societies marked by nationalism, may also contribute to an author's canonization: the "national" character of her/his work in the sense that it deals with national themes, displays the national identity, or attests to the author's devotion to the national cause - a devotion preferably supported by her/his real-life heroism or martyrdom.

Parlichev's canonization has proven to be problematic in all respects.

To which nation did he actually belong? In his youth he had no well-defined sense of national identity and probably considered himself a "Greek" in the sense of being an Orthodox Christian. As an adult he explicitly identified himself with the Greek and later with the Bulgarian nation. In the later decades of his life, he seemed to have been inclined to adhere to some form of vague Ohrid or Macedonian particularism, though apparently continuing to perceive himself as a Bulgarian. Given this evolution, it is understandable that Parlichev's national identity grew into a sensitive issue in the framework of discussions about the existence of a Macedonian nation between Bulgarian and Macedonian (literary) historians. Much has been done by Bulgarian and Macedonian post-war scholars to promote Parlichev as one of the pivotal figures in their respective 19thcentury histories.

This article explores some of the strategies applied by Bulgarian and Macedonian literary historians in order to include Parlichev in their respective national canons and to give him a more prominent place on the ranking list of national writers.

The motivation for canonizing Parlichev proves to have always been political. He served Greek national ambitions when he was given the first prize at the Athenian Poetry Contest in 1860; he served Bulgarian national ambitions, especially after World War II when Bulgarian scholars promoted him as a top class Bulgarian author from Ohrid; and in post-war Yugoslav Macedonia he was out of the blue and unreservedly proclaimed the most important 19thcentury Macedonian author, as if his Macedonian national identity was unequivocal.

The present paper examines the dialogue between three Bulgarian literary texts from the National Revival period and the Russian 19th century literature. On this basis the paper tries to find new possibilities for bringing up-to-date the traditional understanding of the aims of literary reception as a research of a dialogue only with an identified "foreign" text. The part dedicated to the first Bulgarian poem "Stoyan i Rada" by N. Gerov shows through the functionality of the sentimental cliche how Gerov elaborates the conception of hero in the paradigm of European "sensitive hero". The semantic analysis of the "temptation" motif in P. Slaveykov's poem "Izvorat na belonogata" traces a comparative parallel with the emblematic Russian literary project of female "choice" and "responsibility". In the last part the comparative analysis proves that even though it is not a translation, Lyuben Karavelov's short novel "Maminoto detence" has its prime source in the Russian novel "Mammen'kin synok" by I. Panaev.

The present article deals with the sign connotations of the separate elements of the well-known Bulgarian literary character Bay Ganyu's outer portrait. Examined here is the functioning of those elements in the Bulgarian cultural milieu, separate from the author's intentions to profane them by projecting them against the background of European civilization. The text also reflects on the cultural symbolism of the changing of clothes and more exactly on the Bulgarian 'disguising' in Bay Ganyu's time. Interpreted through the code meaning of his portrait's separate elements and through the way they function in the Bulgarian folk consciousness, Bay Ganyu stands out as a new incarnation of the folklore 'madcap', and shows close similarity to the stereotyped image of the folklore hero - outlaw/rebel/revolutionary etc. 'hot head' and fighter on the frontier of the national. But, by dressing in homespun clothes and sheepskin cap, Bay Ganyu in fact does not deny the contact with the foreign civilization - the tailcoat finds a way to his broad-shouldered figure, although not without some kind of resistance. He does not perceive 'Europeanization' as 'disguising', as a change of form and identity. The grotesque combination of the sheepskin cap and the tail coat is actually an endeavour to draw together the two cultures, an attempt at mutual recognition and respect, at combination and gradual assimilation - a mission which proved to be historically impossible in the late 19th century's Bulgarian reality. Thus, Bay Ganyu is a symbol of the other possibility, of the turned down alternative, which will come to life again and again whenever Bulgaria crashes on its way to Europe.

The paper examines the problem of periodization in literary history with the tools of Cultural Studies. The exemplary period is the late 19th century and the early 20th century. The question is whether this period can be described as a period of absinthe, or as a period of tuberculosis, vers libre, spiritualism, or the so-called scientific novels.

The article places the pseudo-oral discursive techniques in the narrative verse of the English Renaissance within the context of publication media and modes of reading. The main argument is that the transition from manuscript to print entails a discursive mechanism of imitation which accounts for the residue of oral performance formulae in print publications. While the medieval habit of reading through vocalization explains the element of orality in Chaucer's narrative address, in the age of print oral contexts are recreated as a compensatory mechanism counteracting the author's distance from the reader. The romance produced in the culture of print, dominated by private reading, nostalgically evokes the social dynamics of the medieval culture of public recital. However, the continuing traffic between the available modes of publication and reading also means that the oral and written discursive gestures remain complementary. The article draws the conclusion that written discourse maintains a fluidity of discursive intentions, assimilating an element of orality in order to reach both an oral public and a readership. This accounts for the secondary oral dimension in the written narrative prepared mainly for solitary reading.

The article aims at examining Tinianov's and Bakhtin's genre theories and the similarities and differences between them. The comparative analysis of these two conceptions shows that their foundation has followed almost the same logic. Both conceptions are similar in considering genre as dynamic construction. This view opposes to the normative aesthetics that examines genre as static system with strict rules. From this point of view Tinianov's and Bakhtin's genre theories are topical in contemporary literary scholarship.