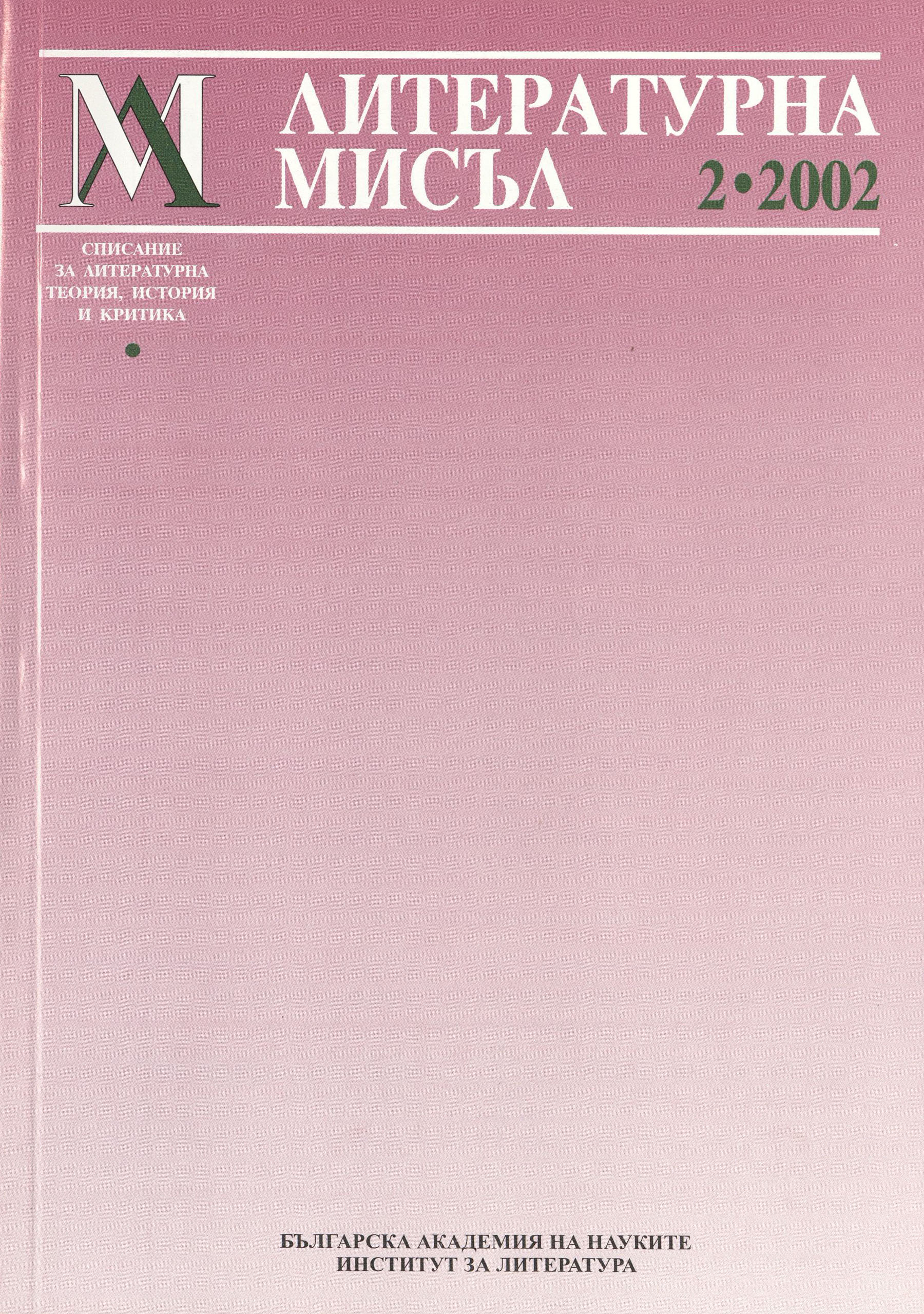 Literary semiotics is not a science with its own object, history or terminology. It is a specific occupation, which appears to be overt, manifestly applied and semiotic (semiotics pursuit in the specified way) on the one hand, and covert, or in other words implicit occupation of literary theory (literary science pursuit in the specified way), on the other. The covertness sterns far in the past - 1928 being a safe start, although it was already predicted a decade earlier - in 1916. The overtness could be traced at the end of the 60s and the beginning of the 70s. When the name “literary semiotics” was first pronounced then, it just followed in the train of an already trodden road. The name can be attributed (an effort to) modernity but the occupation adheres to its own principles. Overt things often appear to be applicatory semiotic - semiotics deals, for one reason or another, with literature as a field in which certain semiotic postulates are applied; the text as a aggregate of signs, but also as a complete sign itself; the text as the practice of assigning meaning, as a process (semiosis); the problem of meaning in literature; the problem of the referent and so on and so forth. Covert things belong to literary theory and it has been difficult to understand them beyond a humanitarian debate since the end of the 19th and the beginning of the 20th century, in which literature does not stand on its own, although it often changes its partners; actually since the time it tries to be a science, to separate itself from aesthetics, sociology, psychology, philosophy. Covert things suppose profound relations to the study of language, to the shift of focus on literature as discourse. Their history is richer than the history of overt things. It is often insisted, and not accidentally, that semiotics has dual application in the study of literature.

Many works of Bulgarian writers reflect the same person or the same trait in opposing moral value. For instance, in Mihalaky Georgiev’s funny stories a patriarchal character may be presented as respectably positive or may be mercilessly ridiculed. Such examples are plentiful in the literary works of Ivan Vasov as well. In his novel “New land”, the sequel of “Under the Yoke”, some of the original characters have undergone a complete character makeover. The main reason for that is historical. The terms in our national life, often taking turns, bring out our existence in relation to the unknown “new land”, where old characters turn into new people, regardless of what they were in the “old land”. But also within the same “old time” framework emerge unexpected innovations - in patriarchal characters like Sultana Glausheva (“The Bells of Prespa”) for example. The changes in her relations towards her daughter-in-law Nia, sometimes unexplained, force us to search for explanation of secrets insufficiently elucidated in our moral heritage.

The feature makes retrospective review of the early Elin Pelin receptions. It recognizes the writer’s hesitation, which also gives cause to Dr. Krastev to treat him critically in his essay “Singer of country woe” (“Young and Old” 1907). The text marks the pro-Jungian conceptions of the critics, by which he makes the reading of Elin Pelin. But the instruments of the German psychological aesthetics proved to be insufficient for applying the critical conceptions, on Dr. Krastev’s side. He operates with the ideas for mythos-figure of the author and the overall personality, without problematizing their interrelations. This provokes the meeting between the critics and the writer. “The literary-critical risks of Dr. Krastev” emphasizes the gradual and independent imposition of Elin Pelin as a Bulgarian literature classic between two withstanding writers’ circle, who characterizes to a great extent the pattern of the literary epoch from the beginning of XX century-this of “Thought” as well as this of “Bulgaran”.

The search, edition and study of the earliest narratives for the Dormition of the Theotokos are the most important stage in the investigation of the narrative texts for the festivity. The author of the present article makes an assumption, that probably a series of narratives in Greek linked with the subject of the Dormition of the Virgin Mary existed. The text which appears in Slavonic milieu which gathers the most important moments of that cycle of narratives, as in the Slavonic text individual subjects (the final part for example) are further developed, enriched and begin their own life. Yet another assumption is made, namely, that the hypothetical narrative in question was an entire, complete and contiguous narrative with an original final part. This final part sets the beginning of the apocryphal visions and revelations, as a continuation of the apocrypha for the Dormition.

The research is an attempt to reformulate the category paratext. The empirical material is taken not only from the speech text (traditionally connected with the paratext), but from media, aesthetics, religious, sports and other discourses. The enlargement of the phenomenon range as well as the enlargement of the theoretical base (textlinguistic and sociological analyses of the discourse and the formulations of prototype theory, developed by cognitive psychology), give an opportunity for a new rationalization of the concept paratext as a text structure, functioning in discourse order of communicative practices that obligatorily accompany texts, circulating in public in order to secure their entry in the social activities, which caused the text and are realized through it.

The paper studies Bakhtin’s prefaces to Tolstoy’s dramatic works as well as his novel “Resurrection”. Our aim has been to examine the prefaces in the light of Bakhtin’s early creative heritage in order to point out the fact that there - despite the prevailing opinion - the researcher has remained loyal and true to his “aesthetics of verbal creativity”. The principal landmark in outlining our arguments has been Bakhtin’s concept of the author (“the crisis of authorship”). We have detected it in two principal interrelated directions, both as an analytical instrument and as a criterion of evaluating Tolstoy’s creative works. Thus, the prefaces, on one hand, analytically elucidate the concept of “the crisis of authorship”. On the other hand, however, it is Tolstoy himself who illustrates it - up to the crisis and through it. Hence the assertion that the prefaces have emerged as an essential link in the unity as well as in the development of Bakhtin’s thought.

In this article the religious attitude in the works of the greatest vanguard poet Velimir Chlebnikov (1885 – 1922) is discussed. Owing to his versatile religious, mythological and folklore knowledge and his ambition to experiments, Chlebnikov creates in his work an original religiousness in which far away from time gods and confessions are connected. In a peaceful dialogue between them. This para-religiousness the poet uses for definite purposes. Here are presented the other acts of para-religiousness in Chlebnikov’s works-universal religions and mythological sections, eastern gods and myths, Slavonic-Russian pagan pantheon.lt is pointed out that the Christian religion is almost missing in the para-religiousness utopia of Velimir Chlebnikov.

With the penetration of post-modernism, post-modernist formulae, metaphors and intellectual constructs Russian literature enters a new dimension, quite new and unusual for it. Actually and fully this process took place in the final decade of the 20th century but is preceded by a number of earlier brilliant episodes of writing in post-modernist vein; it has a quite rich and interesting prehistory. Without seeking to present a comprehensive portrait of Russian literary post-modernism the author of the article dwells on key stages of its development in its multi-faceted and conflicting nature, attempting to produce the approximate integral formula of a contingent Russian post-modernist text by outlining some of the more typical post-modernist bearings of the Russian text and showing the specifically Russian existence of universal post-modernist metaphors, seeking answers to the question as to how there, where still hovers the spirit of Pushkin, Tolstoy, Dostoyevsky, Chekhov and Bunin people accept and apply the “new rules of the game” in literature, i.e. how they respond to the challenges of post-modernist writing.