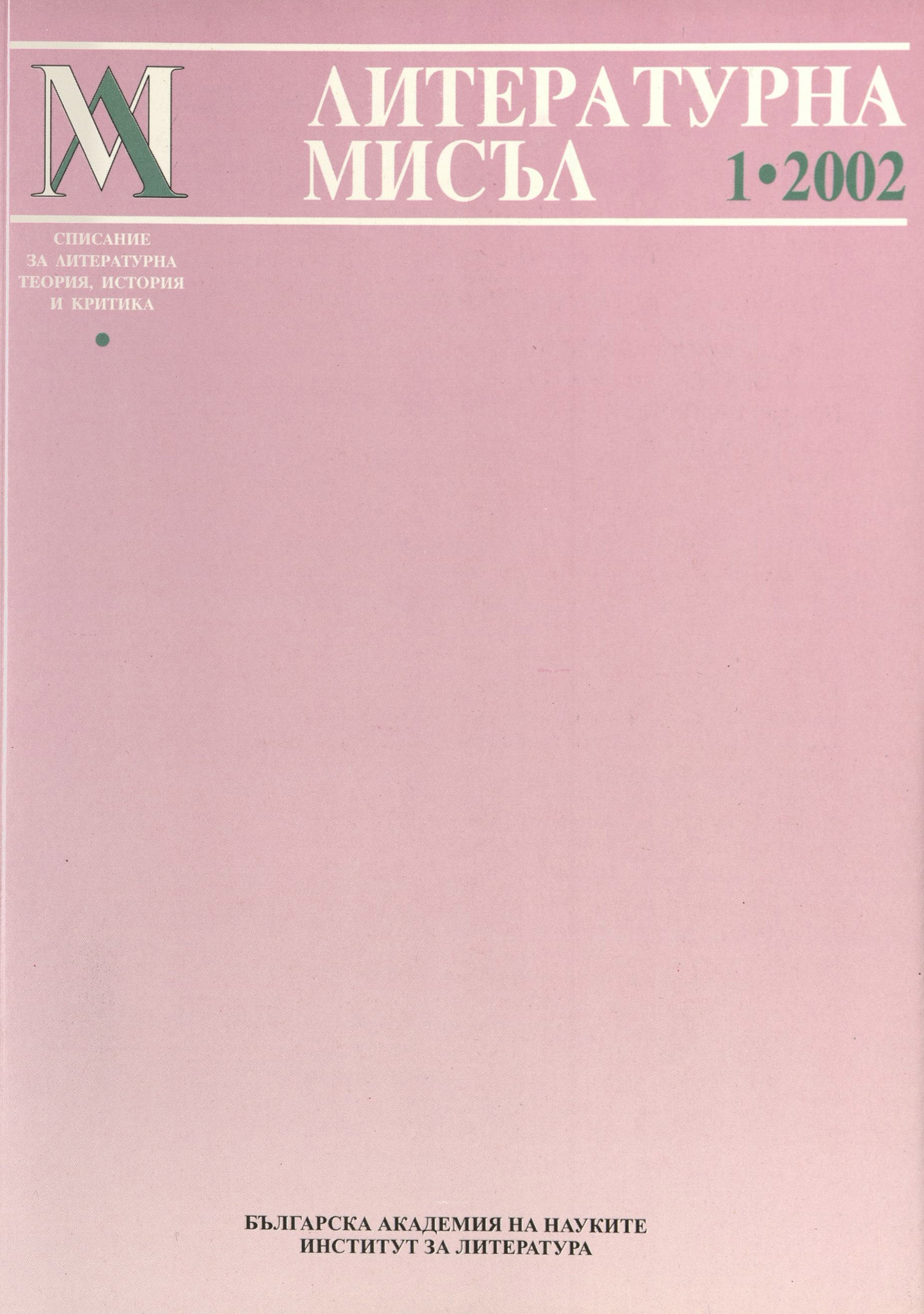 From its earliest days the Bulgarian human sciences have been ardently seeking the roots of Bulgarian culture, finding them in various "layers" and "substrata", affiliating Bulgarians to various communities, constituting, imagining and suggesting their millennial unity and intransigence. Though interesting in itself, this debate is doubly interesting as an illustration of human sciences' vulnerability to political influence and commitments, to marketeering, group or personal goals and unformulated conscious and unconscious desires. The issue in question represents a peculiar actualizing and unfolding of one element of the topical syntheses suggested by Svetozar Igov. The seeking of the "Mediterranean spirit" in Bulgarian culture is a useful and, in a way, pleasant endeavours that for a number of reasons have so far been shelved. It is charged with many questions and hides the usual risks of aberration.

The article examines the model function of Macpherson’s Ossian poems in the Czech National Revival. It is focused on the phenomenon of “presenting” the glorious past of the nation by the construction of a written relic as a cultural and historical monument. This was the main function of The Manuscript of Dver Královi and Zelene hora (1817, 1818). While Macpherson and Blair construct the Ossian poems as a representation of an ancient epoch separated from the present by the timeless voice habitation of the bard, the forgers of The Manuscript emphasize the direct presence of history (in its relationship to the orality and in the form of material artefact, the deliberately fragmented text) in the life of the revival movement. In this way, the ideological and political nature of their work can be demonstrated. But in spite of effort to produce The Manuscripts as a support of claims for ancient Czech rights and lands, the language constructed by the forgers deconstructs itself and reveals the utopian orientation of nationalist ideology. This aspect is reflected in the poetry of Karel Hynek Mácha which radically rewrites the tropes of the nationalist discourse as well as the clichés of late Ossianism (e.g. in the story “Wahnsinn und Tod” by Ernst on Houwald).

The paper is a challenge to give the term “fantasy echo” some substance by finding a use for a psychoanalytic term such as fantasy in understanding historically specific phenomena. The wonderfully complex resonance of fantasy echo is used to recall the existence of retrospective identifications, related to the collective identity of the “women-orator” and “mothers”. The fantasy of the woman-orator is noticeable in different narratives of French feminist history. Joan Scott discovers that this fantasy has played a significant role in the articulation of similar women’s identity in the life-stories of Olympe de Gouges, Jeanne Deroin, Madeleine Pelletier and some others. This similarity functions as a basis for the idea of continuity in feminist history. The maternal fantasy spreads the echo that motherhood is a basis for similarity and sisterhood between women of various racial religious and social groups. The fantasy of the woman as a mother again calls for a collective identity, which gains importance when biological and social differences between men and women come into question. In both examples fantasy-echo functions as a designation of a set of psychic operations by which certain categories of identity are made to elide historical differences and create apparent continuities.

Between 1871 and 1887 Georg Brandes delivered his lectures on "The Main Movements in 19th Century European Literature", where he not only launched the notion "the break of modernity" as the primary task of Scandinavian men of letters, but also stirred the cultures of Denmark, Norway and Sweden, pushing them towards a greater polemicity, topical problems, an increasingly categorical departure from the Romantic legacy and a greater proximity to the spiritual and aesthetic movements in Europe, for the overcoming of the provincial reticence and isolation. The Scandinavian literatures were permeated by new European tendencies, while the notion of loneliness broadened its meaning and became a key concept for the spirit of the time. The study analyses the basic types of loneliness principally distinguished by the researchers and their specific projection in the Scandinavian North, the changes induced by the various epochs. A special emphasis is laid on the attitude to loneliness - conceived not merely as an emotional state as an idea, an outlook to people and the world, - in the greatest representatives of the "break of modernity" in the region such as Ibsen, Bjornson, Schilan, Lie, Garborg in Norway, Strindberg, Jejerstam, Benediktson-Algren, Hanson - in Sweden, Jakobsen, Bang, Jelerup, Pontopidan in Denmark, almost without exception felt the strong influence of philosopher Kirkegaard, the "spiritual father" of that dynamic literary movement. The pattern from Romanticism through Naturalism to New Romanticism, applied to the personal and artistic development of its exponent, eloquently outlines its basic trends until the early 90s of the 19th century, when Knut Hamsun entered literature to take up in his turn the subject of loneliness, transforming it into a dimension of the increasingly important problem of the interrelation between Man and Nature, of the need for a balance between the biological and the spiritual. With his novels a new type of loner entered 20th century.

In the proposed second chapter "The Romantic Era of Drugs" from the treatise "The Imaginary Effigies of Drugs" by the French literary scholar Max Milner we are acquainted with the opium-induced characteristic features in the creative process of such emblematic Romantic artists like Alfred de Musset, Honore de Balzac, Theophile Gautier, Gerard de Nerval and Edgar Allan Poe. The analyzed works reveal the ability of drugs to remove space, time and the separation of the ego from the non-ego - something that has always been the deep goal of the Romantic Movement.

The text interprets priest Mincho Kuntchev's "Vidritsa" as a classical book of the Bulgarian Revival in the light of its methodological commitment to building representative plots about the Balkan cosmos. The emphasis falls in its culture-generating as well as literary role.

The article once again raises the issue of the most controversial or rarely asked questions related to medieval literature - is it literature per se and how its genres ought to be classified; what is its terminological apparatus and the symbolic-mythologizing function of the Bible for each medieval work.

This academic report is dedicated to young Petar Dinekov's life in Plovdiv, where the future great scholar taught Bulgarian language and literature in the French college "St. Augustine". It includes two letters from Dinekov to the headmaster of the college Father Ozone Dampérat and the recently beautified Father Kamen Vichev, then assistant-director of the college, as well as a short article by Dinekov on Yordan Yovkov, publised in the “Le messager” issued by the college graduates.